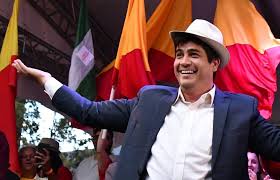 Carlos Alvarado Quesada, is passionate about literature – with three published novels – and a musician who likes rock. He’s also Costa Rica’s 48th president-elect after winning the presidential runoff April 1 in a stunning landslide.

Alvarado, 38, a former Cabinet minister who has studied journalism and political science, carried out a hard-fought campaign against Fabricio Alvarado (no relation), a former legislator and evangelical preacher who has spoken out against gay marriage.

In contrast, Mr. Alvarado Quesada vowed to back the court ruling on same-sex rights, setting up a clear distinction between the two candidates on what quickly became the single-most pivotal issue in the campaign.

“Costa Rica once again delivered a beautiful democratic message,” Mr. Alvarado Quesada told supporters late Sunday night. “Well done, Costa Rica.” He added: “What unites us is much greater than what divides us!”

Mr. Alvarado Quesada will be sworn into office on May 8 for a four-year term leading a nation of about five million people that is celebrated as a popular tourist destination and recognized for its stewardship of the environment.